Concerned about negative pricing in electricity markets?  This insightful commentary from AWEA’s Into The Wind Blog provides insight into negative pricing, its cause, and its impacts on ratepayers in ERCOT and other markets.

Some recent press articles have again fallen into confusion over wind’s impact on electricity markets. Recent occurrences of negative prices during a few hours in some markets are actually a different phenomenon from the localized negative price events we discussed two years ago. However, two similarities to those prior events are that the new events are also largely caused by energy sources other than wind, and that both types of occurrences have a minimal impact on markets.

As background, renewable resources do tend to reduce electricity prices by displacing more expensive sources of energy, benefiting consumers. The cost and emissions savings of using wind energy to displace fossil fuel generation are precisely why wind energy has become electric utilities’ number one choice for new generating capacity. As we explained previously, wind’s impact on electricity prices is an entirely market-based outcome that also occurs for other low-fuel cost sources of energy, such as nuclear, coal, and hydropower.

Much of the focus of recent press articles has been on the main electricity market in Texas, known as the Electric Reliability Council of Texas, or ERCOT. A close examination of wholesale electricity price data shows that negative prices accounted for only 0.64% of ERCOT-wide average market prices in 2015. These events have an even smaller impact on demand-weighted average market prices because they tend to occur during hours of lower electricity demand, and because prices go negative by only a dollar or two in almost all cases. As a result, in 2015 negative prices reduced demand-weighted average ERCOT power prices from $26.38/megawatt hour (MWh) to $26.26/MWh, a decrease of only $0.12/MWh, or less than one half of one percent.

In contrast, volatility in the price of natural gas has a profound impact on ERCOT market prices. In 2014, prices for the delivery of natural gas to power plants in Texas averaged $4.62/MCF (thousand cubic feet), yet that fell to an average of $2.88/MCF in 2015. Because natural gas power plants set the electricity market price in nearly all hours in ERCOT, average electricity prices fell from $36.41/MWh in 2014 to $26.26/MWh in 2015, a decline of 28%. This impact is nearly 100 times larger than the impact of all negative price events in 2015. As numerous sources previously explained, occurrences of negative prices have a minimal impact on generators compared to the effect of fuel price fluctuations.

Other energy sources are a leading cause of negative prices

Low natural gas prices also appear to have indirectly caused many of the negative price occurrences in ERCOT in 2015. Low natural gas prices caused many gas power plants to become cheaper to run than coal power plants in 2015, causing coal’s share of the total ERCOT generation mix to plummet from 36 percent in 2014 to 28 percent in 2015, while gas’s spiked from 41 percent to 48 percent.

Many coal power plants have limited space to stockpile coal. However, as mentioned above, coal purchase and delivery contracts often have minimum delivery requirements, which are used by the mine and railroad to guarantee revenue so they can finance capital upgrades necessary to deliver the coal. As a result of these contract provisions, the power plants must continue to take deliveries of coal even if they don’t need it, or else the power plant owner would face contract penalties or a lawsuit for breach of contract from the mine or railroad.

As a result, it appears that many power plants have decided to continue operating at a loss simply so that they can continue to burn coal to avoid those large contract penalties. In some cases it appears that these coal power plants continue producing electricity as power prices fall well below the cost of operating the plant, even as power prices go negative. The inflexibility of the coal contract provisions thus acts as an out-of-market incentive to continue operating coal power plants despite power prices going negative and sending a signal that generation should be reduced. Different policies have led to a similar outcome in China, with coal generation inefficiently displacing wind generation in some hours.

Indications of out-of-market coal generation can be seen in market data provided by ERCOT. As an example, the following chart from April 8, 2016, shows electricity demand in green and online generating capacity in red. This chart shows that many power plants are available to come online quickly (see the steep increase in the red line at around 6 AM) and increase their output in the morning and as demand increases over the course of the day. Despite the availability of those quick-starting resources, many power plants continued to operate unnecessarily through the night, even as electricity demand fell more than 10,000 MW below the level of online capacity. 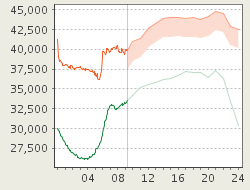 With around 5,000 MW of nuclear generation and around 7,000 MW of wind generation running at essentially 100 percent of their available output that night, one can calculate that around 25,000 MW of fossil generating capacity remained online to meet an incremental need for 15,000 MW or less of generation. This indicates these fossil plants were operating at around 60 percent of their nameplate capacity on average, with many fossil power plants likely approaching the minimum level of generation they can provide while remaining online. Even though power prices fell below $7/MWh early that morning, these power plants remained online and continued generating.

Some of the most definitive proof that the recent negative prices in ERCOT were not primarily caused by wind is that the market prices are not consistent with the prices typically offered by wind generators. In 2015, 50 of the 56 instances of negative prices were between -$1/MWh and $0/MWh, while the other 5 were between $-1 and $-2.21/MWh. In contrast, wind generators receiving the renewable Production Tax Credit (PTC) tend to offer their generation at prices in the $-20/MWh to -$35/MWh range. Texas has less than 1,000 MW of wind capacity that received a Section 1603 cash grant in lieu of the PTC, only around 1,000 to 2,000 MW of projects built prior to 2006 that are reaching the end of the 10-year PTC, and an unknown but likely small number of projects that received an Investment Tax Credit in lieu of the PTC.

In addition to coal, other types of generation also contribute to negative prices. In the U.S., nuclear plants almost never change their output in response to changes in demand or power prices, and hydroelectric plants sometimes continue operating despite negative power prices. For example, April is typically a period of low electricity demand and negative prices in many markets, yet April was one of only two months in 2015 when there were no ERCOT-wide negative prices; the likely cause is that one of the state’s large nuclear units was down for a refueling outage for the entire month. Natural gas power plants often sign contracts with gas pipelines that include “take or pay” provisions with inflexibility similar to that of coal contracts, with the gas power plant owner facing penalties if they do not use gas they have purchased. While coal contracts typically cover periods of several years versus several days for natural gas contracts, these inflexible fuel contracts can still cause negative prices if electricity demand falls unexpectedly but generators must still run to avoid contract penalties.

Transmission can also play a role in alleviating these negative prices, just as it was the solution to the earlier, more localized occurrences of negative prices. In the case of Texas, there are pending proposals to increase power transfer capacity across the asynchronous ties between ERCOT and neighboring regions. This would provide numerous benefits to generators and consumers in both ERCOT and the neighboring regions. For example, when power prices are low in ERCOT they are often high elsewhere, so consumers in those other regions can buy cheaper electricity from ERCOT generators to the benefit of both regions, and the opposite occurs during the hours when power prices are high in ERCOT and low elsewhere. Much like the interstate highway system enables trade that provides billions of dollars in benefits, a stronger electric grid also saves consumers billions.