October was a record breaking month for wind energy output.

Grid operators in Texas (ERCOT) and the Midwest (MISO) spent the past week neck and neck in a race for record wind output, leading to a near photo finish. Texas jumped into first place on October 22, eclipsing the record set by MISO in January 2015, only to have MISO regain the lead less than a week later.

Overall, October saw wind energy output records fall across the country, thanks to the ongoing “wind rush” of new wind project development and long-needed grid upgrades that provided more customers with access to low-cost wind. Not wanting to miss out, the main grid operator in Colorado also set a wind output record in October, as did the grid operator in the Lower Plains states, the Southwest Power Pool (SPP), and operators for New England (ISO-NE).

AWEA is working with the operators from the Mid-Atlantic and Great Lakes states (PJM) to validate preliminary data that indicate they may have also set wind output records over the last several days. These records demonstrate that large amounts of wind energy can be reliably and cost-effectively integrated onto the power system, showing the way forward for other grid operators, utilities, and states interested in ramping up their use of wind energy to comply with Environmental Protection Agency’s Clean Power Plan (CPP). 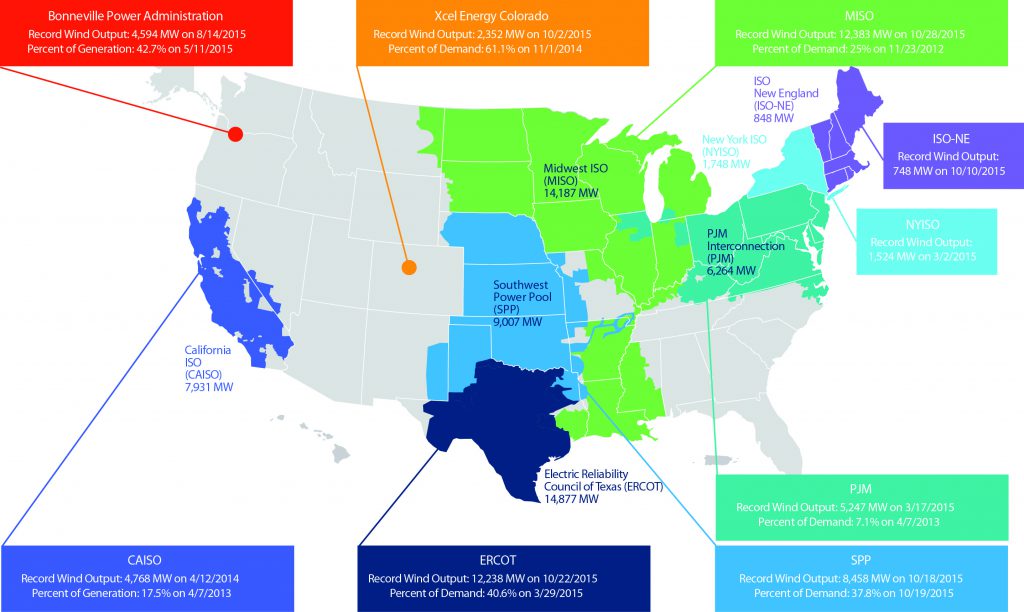 Earlier in the month, Xcel’s Public Service Company of Colorado set a new record of 2,352 MW of wind output on October 2. The SPP, the grid operator for Oklahoma, Kansas, Nebraska, and parts of neighboring states, hit 8,458 MW of wind on October 18. AWEA is working with the operators from ISO-NE and PJM to validate preliminary data that indicate they may have also set wind output records over the last several days.

Wind plants can provide all of the essential reliability services of conventional power plants, making much higher levels of wind use possible.

These records are powerful real-world demonstrations that large amounts of wind energy can be reliably integrated into the power system. When MISO cleared 10,000 MW of wind output for the first time, generating 25% of its overall electricity from wind, it noted that “Wind represents one of the fuel choices that helps us manage congestion on the system and ultimately helps keep prices low for our customers and the end-use consumer.” At one point this March, the main Texas grid operator reliably obtained more than 40% of its electricity from wind energy, while the main Colorado operator has gone higher than 60% wind on several occasions, peaking at 61.1% in November of 2014.

Xcel, the Colorado power system operator, achieved these records by making innovative use of wind plants’ ability to provide fast dispatchable output control, which helps provide total power system flexibility and operating reserves at times of high wind output, instead of relying on conventional generators to provide those services. The advanced power electronics in modern wind turbines allow them to provide the full suite of essential grid reliability services that are provided by conventional power plants, including voltage control and reactive power, voltage and frequency ride-through, active power control, frequency response, and others.

Efficient grid operating practices and proactive transmission policies have made these records possible.

All of the independent system operators in the U.S. employ efficient, market-based grid operating practices that not only facilitate the integration of wind energy, but also cost-effectively accommodate all sources of supply and demand variability on the power system. There are ongoing efforts to bring similar operating practices to the parts of the country that currently lack them, chiefly through the Energy Imbalance Market that is already benefiting consumers in California and other parts of the West, and is quickly expanding based on its demonstrated success.

Texas, MISO, and the SPP have also emerged as wind leaders due to their forward-looking transmission policies. Through the Competitive Renewable Energy Zone (CREZ) process, Texas pioneered the policy of pro-actively planning transmission to access high-quality renewable resources and broadly allocating the cost of that transmission. As a result, Texas now has more wind capacity under construction than any other state. MISO and SPP subsequently followed suit by adopting similar policies, and they are now also enjoying a wind rush as new transmission lines provide access to some of the best wind resources in the world.

These records, and the steps utilities and grid operators have taken to achieve them, offer an important lesson for those looking to use zero-emission wind energy to comply with the Clean Power Plan. For one, they show that large amounts of wind energy, many times higher than the levels currently being used in much of the country, can be reliably and cost-effectively integrated. Highly cost-effective transmission investments and market-based grid operating reforms, which pay large dividends even in the absence of wind energy, have the added benefit of providing consumers with access to America’s most cost-effective wind energy resources.

For more information about how large amounts of wind energy are being reliably integrated, see our February report “Wind energy helps build a more reliable and balanced electricity portfolio.”